Few American coins are as rare and celebrated as the 1822 Capped Bust Half Eagle. Despite a reported mintage of 17,796 pieces, there are only three known survivors. Two of these permanently reside within the collection of the Smithsonian Institution, leaving just one example available to private collectors. The single privately owned piece was purchased at auction more than 30 years ago and still resides within the same collection. 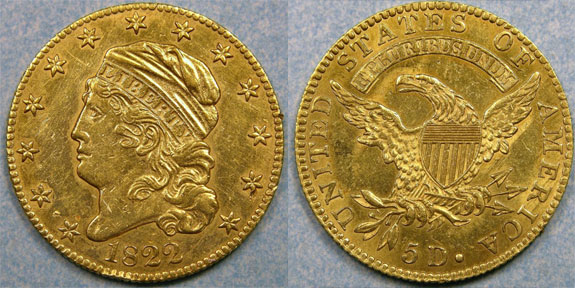 The Half Eagle underwent numerous design changes during the early years of production. The original design by Robert Scot featured a depiction of Liberty wearing a cap, with her bust visible and partially draped. The initial reverse design carried a small eagle perched on a branch and holding a wreath in its beak, followed by an updated image of a heraldic eagle. In 1807, an entirely new obverse and reverse design by John Reich was adopted, featuring fresh renditions of Liberty and the eagle. The design would be modified in 1813 to include only Liberty’s head and neck with stars surrounding the portrait. Further alterations to the lettering, stars, and even diameter would continue to take place through the conclusion of the series in 1834.

According to Mint records, the 1822 Half Eagle had a total mintage of 17,996 pieces. From this quantity, only three examples are still known to exist. Notably, other dates of the series have comparable or even lower mintages, yet these are represented by a far greater number of survivors. There are several explanations which have been offered for this unusual situation.

First of all, these early United States gold coins were heavily exported to overseas countries, in particular Europe and China. Once overseas, in most cases the coins were melted down for their gold content. When the intrinsic value of the $5 gold coin had risen to $6, the melting became even more widespread. This phenomenon served to enhance the rarity of many early American gold coins. In the case of the 1822 Half Eagle, there may have been other contributing factors as well.

Despite the lack of any supporting Mint documentation, it is possible that the majority of 1822 Half Eagles were retained at the Mint for a number of years and subsequently melted. This situation would have been similar to the Double Eagles of the 1920’s and early 1930’s, which were produced in reasonable quantities but became rarities due to subsequent melts. While there is plenty of supporting documentation from Mint records for the Double Eagle melts, none is present for the 1822 Half Eagle. Nonetheless, the scenario remains plausible.

The final possibility is that the mintage of 17,996 is incorrect. At the early days of the Mint, dies were sometimes used in production across multiple years for cost-saving reasons. Thus, it is possible that the reported mintage figure contains coins which were produced carrying a different date, leaving the true mintage much lower. This potentially lower mintage combined with melting under various circumstances may be the best explanation for the creation of this rarity.

Of the three surviving examples of the 1822 Half Eagle, the finest known has been graded by PCGS as AU-50. After changing hands through a number of early owners, the coin was eventually purchased by Louis E. Eliasberg in 1945 for a price of $14,000. This coin became part of his famous complete collection of United States coins where it remained for many years. When the collection was dispersed in 1982, the piece sold at auction for $687,500. The winning bidder was David Akers, who represented the Pogue family. In 2016, the coin was offered for sale at auction once again. The maximum bid received was $7,285,000, however the coin failed to sell since it did not meet the seller’s reserve price. This coin remains the only known example in private hands.

The two remaining examples reside within the National Numismatic Collection at the Smithsonian Institution. These pieces grade VF and EF, although both exhibit signs of cleaning. The VF example traces its origin back to the collection built by Adam Eckfeldt, who had served as the second Chief Coiner of the United States Mint. The EF example was originally purchased in 1884 by a bullion dealer for $6.50 and changed hands many times before it was donated by the Josiah K. Lilly estate to the National Numismatic Collection.