The 1870-S Half Dime represents one of the most enigmatic rarities within American numismatics. According to official mint records no examples of the coin were ever struck, yet a single example was discovered in 1978. This represented a major numismatic event and added a unique issue to the series of Seated Liberty Half Dimes. 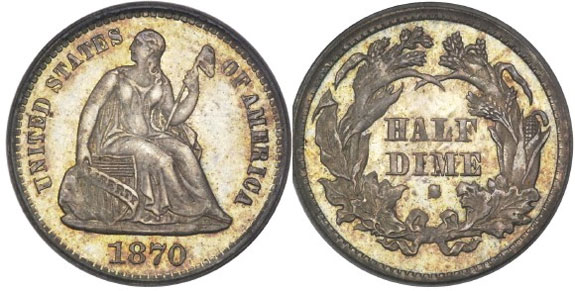 The story of the discovery has been recounted in various references and although it seems fantastic, it has been confirmed multiple times by major numismatic scholars. The unique 1870-S Seated Liberty Half Dime was originally discovered in a dealer’s “junk box” containing common, low value coins. Shortly thereafter, it would be publicly exhibited at the 1978 American Numismatic Association convention held in Houston, Texas. The coin was examined and declared genuine by Kam Ahwash, a noted expert on Seated Liberty coinage, and Walter Breen, a major numismatic scholar.

It is believed that the 1870-S Half Dime was created to commemorate the laying of the cornerstone of the second San Francisco Mint in 1870. This information comes from a slip of paper accompanying another unique coin, the 1870-s Three Dollar Gold Piece, when it was offered at auction in 1911. The paper contained a note from J.B. Hampstead, Chief Coiner of the San Francisco Mint in 1870, indicating that two examples of the 1870-S Three Dollar Gold Piece had been struck, with one placed at the cornerstone of the new Mint and the second kept as a duplicate.

While unconfirmed, most numismatic researchers believe that the information provided in the note by Hampstead also applies to the 1870-S Seated Liberty Half Dime. If this is true, then another example of the coin could still be retained within the cornerstone of the second San Francisco Mint, possibly along with 1870-S dated coins of other denominations.

Since the 1870-S Half Dime is a unique coin, the grade is perhaps not as important as for other rarities where multiple examples exist. For a long time, the coin had been graded MS-63 by both PCGS and NGC. The coin was eventually upgraded to MS-64 and housed in a PCGS holder as part of the Law collection.

The unique coin shares some characteristics with other San Francisco Half Dimes of the era. Most notably it is slightly weakly struck in the upper left reverse. Also, the mintmark on the reverse is filled and not immediately recognizable as an “S” without closer examination. When the issue was first identified as genuine in 1978, it was also determined that the same reverse die was used to strike 1871-S Half Dimes.

The first publicized sale of the 1870-S Half Dime occurred in 1978 shortly after its discovery. The coin was sold for $425,000 to John Abbott, with the price determined as $25,000 more than the 1804 Silver Dollar that was sold as part of the John Work Garrett collection.