The 1878-S Seated Liberty Half Dollar (Buy on eBay) is among a handful of key date coins which do not have the lowest mintage for their respective series. The reasons behind this particular issue’s rarity are multifaceted and involve an exploration of the production levels for another denomination as well as circulation patterns across the country. The net result was the creation of a key date coin with approximately 60 surviving examples, which generate substantially stronger interest compared to the lower mintage issues of the series. 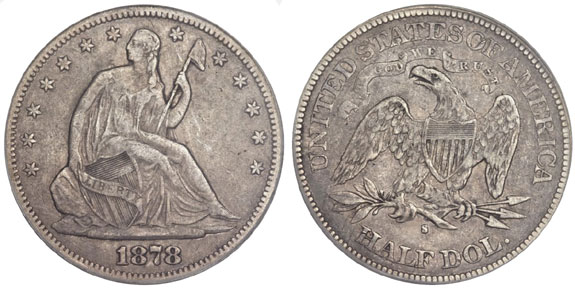 The half dollar was one of the most popular denominations for much of the 19th century. Accordingly, it was consistently struck at various mints in large quantities. During the years of 1875 to 1877, more than 10 million half dollars per year were struck, with production taking place at Philadelphia, Carson City, and San Francisco. Production would drop precipitously in 1878 and remain at minimal levels for the next decade. This dramatic change was the direct result of the surge in production for the silver dollar.

The production of silver dollars for circulation was halted in 1873 when legislation had been passed to replace the denomination with the Trade Dollar, which was solely intended for use in export and international trade. The situation would change once again with the enactment of the Bland-Allison Act of 1878, which required the United States Treasury to purchase a certain amount of silver each month to be minted into silver dollars and placed within circulation.

The act had been passed after extensive pressure from Nevada, where the mines of the Comstock Lode were still turning out a huge supply of silver. To fulfill the requirements of the act, all mint facilities including Philadelphia, San Francisco, New Orleans, and Carson City had to turn out immense numbers of silver dollars each month. This massive increase in silver dollar production had a significant impact on the production of other silver denominations, which saw their mintages decline to substantially lower levels for the next decade.

Following production of more than 5 million half dollars in the previous year, the San Francisco Mint would strike only 12,000 examples of the 1878-S Half Dollar. After this meager production, no additional Seated Liberty Half Dollars would ever be struck at the San Francisco Mint as production would be focused almost exclusively on Morgan Silver Dollars to fulfill the requirements of the Bland-Allison Act.

From the original mintage of 12,000 pieces, only a small portion are currently known to exist across all grades, with the most generous estimates indicating 60 surviving examples. The low survival rate can be attributed to several factors.

Since there was little interest in collecting branch mint issues and virtually no coin collectors in San Francisco at the time, very few pieces were saved for numismatic purposes. The location of the issue played a further role in its ultimate rarity. Within the Western United States, coins experienced heavy circulation, with the half dollar particularly popular within commerce. The small mintage of 1878-S Half Dollars experienced a very high attrition rate as pieces were worn beyond recognition, lost, or melted.

The situation on the other side of the country stood in stark contrast. Over the next decade, the Philadelphia Mint would continue to strike the Seated Liberty Half Dollars, but in minuscule quantities. During eight years, the annual mintage would fall below 10,000 pieces, with the lowest mintage of 4,400 pieces taking place in 1882 and 1884. Despite the low mintage levels, these issues are not nearly as rare as the 1878-S half dollar. Rather than heavily circulating, the small number of coins produced by the Philadelphia Mint were subject to widespread hoarding, leading to a very high survival rate.

There are a small number of high-grade examples of the 1878-S Seated Liberty Half Dollar which have managed to survive. Offerings of these examples are infrequent and highly competitive due to the popularity of the series and collecting coins of the San Francisco Mint in general.

The finest known example of this rarity has been graded MS-66 by PCGS. At the gem level of MS-65, two pieces each have been graded by PCGS and NGC. This is followed by a handful of pieces graded MS-63 and MS-64, the uncirculated grade levels which tend to make the most frequent appearances at auction. A superb example graded PCGS MS-64 with proof-like surfaces reached a price of $184,000 at auction in 2009. The same example with a CAC sticker added reached a record auction price of $199,750 in 2014. Several examples graded MS-63 have reached prices exceeding $100,000 during the past decade.

At the lower end of the spectrum, a well circulated piece graded PCGS AG-3 recently sold at auction for $21,600. A bit further up the scale, an example graded PCGS VF-30 realized a price of $49,937.50. Among the infrequent offerings are also some examples which have been improperly cleaned or show other impairments. Despite their flaws, even these coins drive strong prices due to the overall low number of survivors for the issue.