The 1880 Shield Nickel (Buy on eBay) is the undisputed key date of the Shield Nickel series as well as one of the rarest circulation strike nickels ever produced. Its mintage was a scant 16,000 pieces and attrition from circulation was very high, leaving few surviving examples. The coins are difficult to find in any grade and particularly in uncirculated condition. The Philadelphia Mint also produced 3,955 proofs for the year, but due to the much higher survival rate, this version remains much more available. 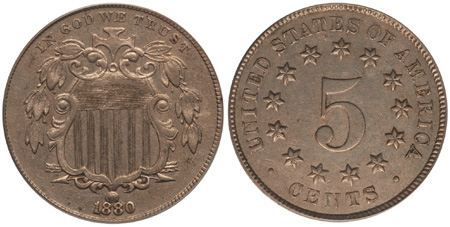 Originally, the five cent pieces produced for circulation within the United States were struck from silver and referred to as half dimes. Over the years, the denomination had been the subject of complaints by the public since the coins were very small and easily lost. Eventually, the rising price of silver made the half dime impractical for the Mint to produce, setting the stage for a new composition and format for the denomination.

Nickel had been used since ancient times and was known for its hardness, but widespread usage did not occur until the early 19th century when the metal was discovered to be a byproduct of cobalt blue production. The United States Mint started using nickel in their coins in 1857, when the first small cents were struck in 88% copper and 12% nickel. The coins had a distinctive color and were soon called “nickels” in circulation. However, due to difficulties in striking the coins, the composition for cents was soon replaced with an alloy of 95% copper and 5% tin and zinc.

In 1866, the Shield Nickel would be introduced as the first series for the five-cent “nickels,” which were struck in a composition of 75% copper and 25% nickel. The obverse design featured a large shield with the reverse carrying the denomination. Similar to the issues encountered with the cents, the new nickels were difficult to strike up fully and many of the coins featured incomplete strikes. Production was also very hard on the dies and many would show die cracks or breaks. Despite these issues, production would continue and through the mid-1870’s the Mint was turning out a steady supply of nickels each year. However, mintages soon dropped to minimal levels resulting in two years or proof only strikings and the creation of the extremely low mintage circulation strike 1880 Shield Nickel.

After striking more than 2.5 million Shield Nickels in 1876, the Mint would only strike the denomination in proof format for the following two years. Production for circulation resumed in 1879 with a limited mintage of 25,900 pieces. For the 1880 Shield Nickel, the mintage would decline further, with just 16,000 pieces struck for circulation. Surprisingly, the Proofs saw a record production that year, with a total of 3,955 pieces struck and sold to collectors.

Coin grading companies PCGS and NGC have certified around 150 examples of the circulation strike 1880 Shield Nickel across all grades. The number is no doubt inflated by resubmissions. It is also believed that some of these examples may in fact be circulated proofs. With so few examples known, some have drawn the possible conclusion that most of the original mintage may have never been released. These pieces may have been later melted with the material used to strike other nickels, such as the common 1882 Shield Nickel with a mintage of more than 11 million pieces.

The total number of surviving circulation strike 1880 Shield Nickels has been estimated to be in the low hundreds. Conservative estimates suggest that perhaps no more than 125 pieces may exist across all grades. As for the proofs, which were more carefully saved, around 2,000 examples may remain in existence across all grades.

The finest known 1880 Shield Nickels are two pieces graded by PCGS as MS-66. Gems are extremely rare for this issue as well. PCGS has graded seven coins as MS65, while NGC’s population report shows a total of four pieces graded as such.

The Proof 1880 Shield Nickels are much more affordable. A proof example with good eye appeal in PR-65 condition can be bought for less than $2,000. Examples which have been given the cameo or deep cameo designation by grading companies are scarce to very rare and represent only a minority of all certified examples. An example graded NGC PR-66 Ultra Cameo sold for $4,025 in October 2009.