Commemorative coinage plays an important role in American numismatics, highlighting the people, places, and events that shaped the country. The classic commemorative coins issued between 1892 and 1954 feature a wide variety of creative and sometimes peculiar designs struck in silver or gold across a range of different denominations. Even amidst this great diversity, the 1915-S Panama Pacific $50 Gold Pieces (Buy on eBay) stand apart for their size, shape, beauty, and extremely limited mintage. These coins were issued as part of a larger program authorized to commemorate the Panama-Pacific International Exposition. 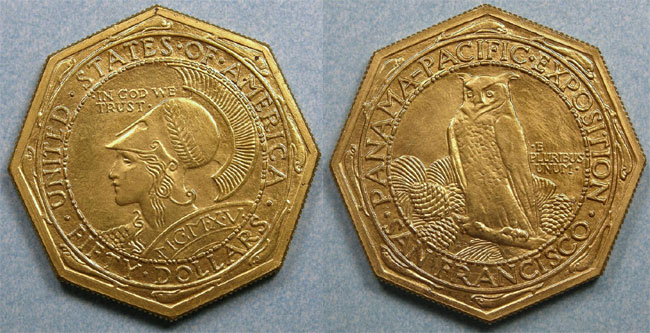 The exposition was a world’s fair held in San Francisco from February 20 to December 4, 1915. The purpose of the fair was to celebrate the completion of the Panama Canal, but it was also seen as an opportunity for the city to showcase its recovery from the devastating earthquake of 1906. Highlights of the exposition included the Liberty Bell, which was moved from Philadelphia for the occasion, the first steam locomotive of the Southern Pacific Railroad, and a phone line laid from San Francisco to New York, so that people across the country could hear the Pacific Ocean. The exposition was held along the northern shore of San Francisco, with many buildings constructed to house the various exhibits. The central building was known as the Tower of Jewels, which was covered by more than 100,000 cut glass faceted Novagems.

Congress authorized a series of gold and silver coins to be struck in commemoration of the exposition.  While a number of commemorative coin issues had been authorized previously, this would represent the most extensive program to date, including coins across four different denominations, each featuring a different design.  A silver half dollar featured an image of Liberty scattering fruits and flowers from a cornucopia with the Golden Gate in the background. A gold dollar carried the profile of a Panama Canal laborer wearing a cap. A gold quarter eagle included an image of the goddess Columbia holding a caduceus and riding through the waters of the canal on the mythical hippocampus.

The fourth and most ambitious coin was the $50 Gold Piece, which was struck in both round and octagonal versions. The coins contained 2.4286 troy ounces of gold and measured of 43 mm in diameter for the round version and 44.9 mm across for the octagonal version. At the time, these represented the largest and heaviest coins ever issued within the United States. Designed by Robert I. Aitken, the coins carried an obverse design featuring Minerva, the goddess of wisdom, skill, contemplation, spinning, weaving, agriculture, and horticulture. The goddess wears a crested helmet, which is pushed back to represent peaceful intentions. The date appears on her shield, expressed in Roman numerals as MCMXV. On the reverse of the coin is a depiction of an owl perched upon a branch of western pine. The owl was sacred to Minerva and a symbol of wisdom. The octagonal version of the coin featured the same design with dolphins placed at the vertices.

The authorizing legislation for the program called for a maximum of 3,000 Panama-Pacific $50 Gold Pieces to be struck at the San Francisco Mint. Since the facility lacked a press capable of striking the large coins, a hydraulic medal press was shipped from Philadelphia. The ceremonial first strike would take place on June 15, 1915, with the first coin struck by San Francisco Mint Superintendent T. W. H. Shanahan. The full authorized mintage would be produced, consisting of 1,500 each of the round and octagonal versions.

The Panama-Pacific Exposition Company arranged for coin dealer Farran Zerbe to sell the commemorative coins at the fair, although sales would end up lower than expected for a number of reasons. First of all, even though the authorizing legislation had called for the coins to be delivered prior to the start of the fair, they were not actually delivered until the fair was well underway. Secondly, attendees at the fair were presented with a wide variety of replica coins and medals from other vendors, which they may have purchased rather than the official commemorative coins. Finally, the cost of the coins was prohibitively expensive, which kept them out of reach from all but the most affluent collectors. The $50 gold coins were available individually, priced at double the face value, or within multi-coin sets with other coins from the program. The set options included a four-coin set with one of the $50 golds priced at $100, a five-coin set with both $50 golds priced at $200, and a ten-coin double set priced at $400. Copper and glass frames lined with purple velvet were available to display the sets, and these have become highly collectable over the years.

Zerbe sold the coins for the duration of the fair and continued to accept mail orders even after the fair had closed. The mail orders continued until at least November 1916, after which point the remaining unsold quantities of coins were returned to the Treasury to be melted. After melting, the octagonal version of the $50 gold coin had a net distribution of 645 pieces. The round version had even lower sales and ended up with a net distribution of 483 coins, representing the lowest mintage United States coin of the 20th century.

Because the 1915 Panama-Pacific $50 Gold Coins sold for a strong premium at the exposition and were not intended for circulation, nearly all surviving specimens are in uncirculated condition. The surviving coins are offered for sale somewhat frequently due to the high survival rate, although top graded specimens command special attention. 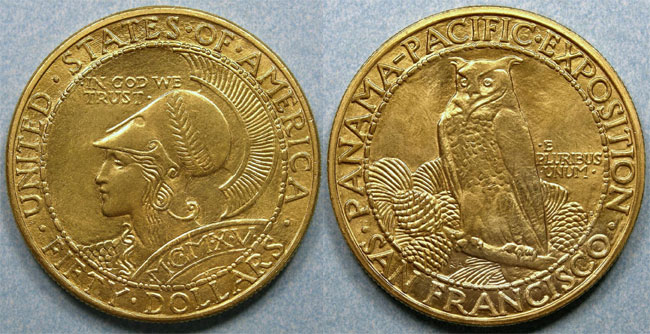 For the round version, the finest known examples include four pieces which have been graded MS-67 by NGC and three pieces graded MS-66 by PCGS. The auction record price for this issue is held by one of the PCGS MS-66 pieces, which sold for $336,000 in 2018. At the gem level of MS-65, recent sales have ranged from $120,000 to $192,000 with the price highly impacted by quality within the grade and eye appeal.

As mentioned, the original frames which held the Panama-Pacific Exposition Commemorative Coins are highly collectable as well. In the past, complete sets housed within original frames were occasionally auctioned, however most sets are now broken up and sold individually. This leaves the empty frames to be offered alone, with some selling for amazing prices. An empty frame for the five-coin set sold for $6,600 at auction in 2018. The more desirable and rarely seen frame for the ten-coin double set realized a price of $18,000 the same year.