The so-called 1922 “No D” or 1922 Plain Lincoln Cent (Buy on eBay) is an intriguing variety that has remained in high demand with collectors. The variety is only identifiable due to a particular set of circumstances that occurred during the year of production. It is now considered to be among the scarcest of the Lincoln Cent varieties, especially in high grade, and one of the key dates to an uncirculated set of Lincoln Cents including major varieties. 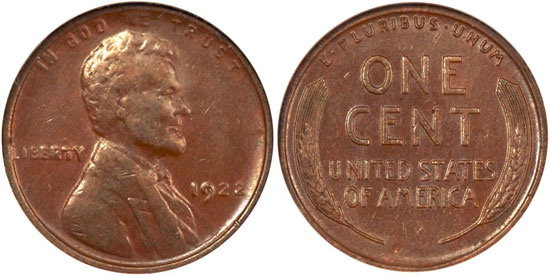 In 1922, the production of Lincoln Cents only took place at the Denver Mint facility. The Philadelphia and San Francisco Mints, which would have usually produced the denomination, were focused on striking silver dollars which had been reintroduced in the previous year. This resulted in the Denver Mint carrying the sole responsibility for maintaining the supply of freshly minted cents.

In 1922 during the course of regular cent production at the Denver Mint, one of the die pairs severely clashed. This was the result of a strike occurring with no planchet placed between the obverse and reverse dies. While this situation is a relatively common occurrence, in this instance the clashing was severe enough to warrant special attention. The obverse die would be repolished, while the reverse die was removed from production entirely. During the process of repolishing the obverse die, the mint mark was inadvertently removed and the last two digits of the date were weakened. As a result, all coins struck with the repolished die would not contain the “D” mint mark.

In any other year, these cents struck at the Denver Mint without the “D” mint mark would have escaped identification. It would have been naturally assumed that the coins were simply products of the Philadelphia Mint, which did not place a mint mark on their coins. However, this year both the Philadelphia and San Francisco Mints did not produce cents as they were focused on the production of the large amount of silver dollars required under the Pittman Act. Since the Denver Mint was the only facility producing cents during the year, identification of the variety was possible.

The variety created by the clashed dies and repolished obverse die is known as the “No D, strong reverse” variety from die pair #2. This represents the most desirable and valuable variety for the issue. Similar varieties exist referred to as the “Weak D” variety from die pairs #1, #3, and #4, which were created as the result of dies filled with grease obscuring the mint mark. For this class of variety, traces of the mint mark are sometimes visible, but this is not always the case. As such, certain die markers are very important when identifying the different die pairs. These die markers mostly include the strength of the lettering and devices.

The 1922-D Lincoln Cent had a total mintage of 7,160,000 pieces, the lowest number since 1915, but not low enough to create a rarity. However, the “No D, Strong Reverse” variety is a completely different story. The exact number produced is unknown, but a reasonable estimate might be around 25,000 pieces. The total number of survivors is as much guess work, although a figure below 10,000 pieces seems likely.

This variety went somewhat unnoticed during the early decades after its mintage, leading most examples to experience significant circulation. Uncirculated specimens with original Mint red luster are extremely rare. This shows that the survival of the typical circulating coins from this era in high grades is often a matter of pure chance.

The 1922 “No D, Strong Reverse” Lincoln Cent is represented by only two examples in Mint State grades with original Red coloration. These pieces are graded PCGS MS-63 RD and PCGS MS-64 RD. The example graded MS-63 RD, which actually shows some streaks of darker reddish-gray coloration, was sold at auction for $48,000 in 2018.

With so few Red coins available, most collectors must instead settle for high grade examples with Red-Brown or Brown coloration. The finest Red-Brown examples include one MS-65+ RB example and two MS-65 RB examples graded by PCGS as well as a lone MS-65 RB from NGC. Besides these, there are approximately two dozen additional Red-Brown pieces in lower uncirculated grades. These pieces periodically appear at auction and have sold for prices ranging from around $30,000 to a record high price of $92,000 for an example graded NGC MS-64 RB.

With Brown coloration, population reports show approximately 80 pieces in Mint State grades, although these are concentrated around the MS-61 to MS-63 grade levels. Only a single coin has been graded MS-65 BN by PCGS with none graded by NGC at this level. This coin last sold for $67,563 at auction in 2014. The coins graded MS-62 BN to MS-63 BN tend to make auction appearances with some regularity and sell for prices ranging from $10,000 to $30,000.

Circulated examples are much more available and affordable, although they remain rare and highly popular. Prices for specimens certified in Extremely-Fine condition are approximately $2,500, with the amount gradually reduced for lower grades.