The 1794 Flowing Hair Silver Dollar (Buy on eBay) holds an important place in both history and numismatics. Besides representing the first year of issue for the important silver dollar denomination, the issue also carried a limited mintage and experienced heavy circulation, making any surviving examples great rarities. One superlative example of the coin, which many believe to be the first silver dollar ever struck by the United States Mint, was sold for more than $10 million, representing the highest price ever paid for a coin. 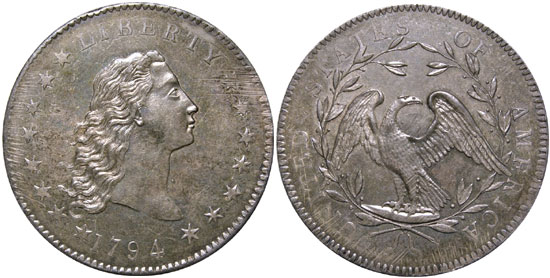 The silver dollar was authorized under the Coinage Act of 1792 as the primary unit of currency within the American monetary system. The denomination, which would be subdivided into 100 cents, was based on the continental thaler. The word comes from the High-German word for valley, thal (modern word tal) and in particular the Joachimstaler. This was a large silver coin first struck in the early 16th century in Sankt Joachimsthal, the German name for what now is Jáchymov in the Czech Republic. The Joachimstaler was shortened to “thaler” and became a popular coin throughout Europe and circulated in the American colonies as well.

Robert Scot is believed to have designed the 1794 Flowing Hair Silver Dollar. He was also responsible for the majority of the early coin designs of the United States. The obverse features a representation of Liberty with flowing hair. The reverse displays an image of an American Eagle, which would also be used in modified form on various denominations. The obverse design would only be used on half dollars and silver dollars struck in 1794 and 1795, however it did become an inspiration for later coinage designs which featured representations of Liberty. It would also serve as the image of the young United States to the outside world and later a popular image of late 18th century America.

Production of the 1794 Silver Dollar took place in October 1794, amidst some challenges for the early United States Mint. Primarily, the Mint did not yet have a coinage press that would be fully capable of striking the large silver dollar denomination. Since they did not want to delay production, they utilized a screw press which was usually only used for copper cents and silver half dollars. This small press would cause various problems during striking.

It is believed that an initial quantity of 2,000 silver dollars were struck by the early mint on October 15, 1794. From this amount 242 pieces were rejected as unfit for release. This could have been due to several reasons, such as extremely weak strikes or badly off-weight planchets. As a result, records show a total delivery of 1,758 silver dollars, which has come to represent the official mintage of the issue.

The die states of the 1794 Silver Dollar have been closely studied by Martin Logies, who wrote the major reference on the subject. According to his research, early in the production process the dies clashed and were lapped, partially removing the clash marks. Later, the dies would be lapped again, fully removing the clash marks. Coins struck from perfect dies are extremely rare, with only three pieces presently identified as such. Most of the coins that are known to exist were struck after the dies had been lapped the first time. Additionally, the research has shown that early in the production process the dies shifted, resulting in weak strikes especially notable on the left side of the obverse. 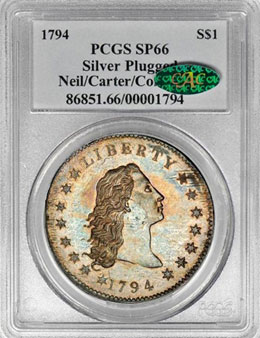 It has been estimated that 130 to 150 examples of the 1794 Silver Dollar have survived to the present day, representing less than 10% of the original mintage. Of this number, only about a dozen pieces can be found in uncirculated grades. The remaining quantity are found in lower circulated grades, with many examples damaged, cleaned, and/or repaired.

A single specimen striking of the coin has been designated by PCGS and graded as SP-66. The coin is struck from the same die state as a copper trial striking and is the only known example with a silver plug. Furthermore, the coin features an above-average strike, proof like surfaces, and excellent eye-appeal. These characteristics have led many to believe that this coin was the first silver dollar ever struck in the United States. Known as the Neil/Carter/Contursi specimen, this coin sold in a private transaction in the summer of 2010 for the amazing amount of $7,850,000, establishing a new record for the highest price ever paid for a coin. The record would be broken less than three years later when the same coin was sold for $10,016,875 at auction. The buyer of the coin was Legend Numismatics of Lincroft, New Jersey who indicated no plans to sell the coin.

Most auction appearances for this coin tend to be for lower grade or impaired examples, however these coins still drive strong prices due to the rarity and historic status of the issue. An example graded PCGS AG-3 with only the top portion of the numbers in the date just barely visible realized a price of $51,600 at auction in 2019. Even the most heavily impaired or damaged pieces tend to reach prices of $30,000 or more.