The 1849 Liberty Double Eagle is one of the most famous and valuable coins ever struck. Only a single example of this legendary rarity is known, although for more than a century there have been rumors of an additional specimen. The known coin is part of the National Numismatic Collection of the Smithsonian Institution and thus very unlikely to ever become available to collectors. Its estimated value is around $15 million, although the price at auction could be substantially higher, due to the prominent status of this famous issue.

The history of the coin starts in January 1848, when gold was discovered in the Sacramento River, located in the United States territory of California. Having only recently become part of the United States, California was sparsely populated at this time, although small groups of settlers came in every year by way of the Oregon Trail. This would all change after the first flakes of gold were discovered and the news reached the states along the eastern seaboard. A massive movement of people and supplies began, all headed west towards California. The discovery of gold in California would bring significant changes to the United States as well as its monetary system.

In 1848 the largest denomination was the Eagle, or the ten-dollar gold piece, as specified by the Mint Act of 1792. First struck in 1795, it was a large and valuable gold coin, used primarily for business between banks or overseas trade. With vast amounts of gold coming out of California, it was determined that an even larger denomination was necessary to convert the bullion into coins. The Coinage Act of 1849 authorized two new gold denominations, the gold dollar and the Double Eagle, with a value of twenty-dollars. The initial design for the Double Eagle was created by James B. Longacre and features an image of Liberty wearing a cornet and surrounded by 13 stars. The reverse features a version of the heraldic eagle with large scrolls to either side and an arrangement of stars and rays above.

Technically, the 1849 Double Eagle is a pattern, an experimental piece struck before issuance of a new design, or in this case a new denomination. The coin is listed in all pattern references as Judd-117 and Pollock-132, with both texts referring to it as a unique coin. However, Walter Breen has written that at least two examples of the coin were struck on December 22, 1849. The first piece would have been the Mint cabinet example that would eventually reside at the Smithsonian. The rumored second piece supposedly went to Treasury Secretary William M. Meredeth and found its way to the Steven K. Nagy collection. Nagy passed away in 1958 and beyond the rumors, the existence of the coin has never been confirmed. Many experts doubt the existence of this second specimen and it seems unlikely that it would surface after all of these years, however stranger things have happened in the world of numismatics.

Interestingly enough, there was an example of the 1849 Double Eagle struck in brass at a later date, supposedly in the 1870’s. This piece is known by its appearance in the 1892 Woodside Collection Sale. The coin appeared to be gold plated (gilt) when it was photographed and sold for $55. The piece was supposedly traded by the Mint for an 1804 Silver Dollar sometime in the second half of the 19th century. Since its sale in 1892, the location of the piece remains unknown. This Brass piece is listed as Judd-118 and Pollock-133 and thus is only known by the aforementioned photograph.

There are a few minor differences between the 1849 Double Eagle in the Smithsonian Institution and the 1850 Double Eagles struck for circulation in the following year. Most importantly, the coin is in a slightly higher relief than any of the circulation strikes from later in the series. The placement of the stars and execution of some of the very small details of the design are also slightly different. Other than that, the pattern piece is similar to later issues of the earliest Double Eagle type.

Neither of the major grading companies have ever had a chance to grade the unique 1849 Liberty Double Eagle, although the coin is usually encapsulated in a holder which NGC specifically made for the Smithsonian Institution. A representative of PCGS has mentioned that they would likely assign a grade of PR-63 or PR-64, based on viewing the coin through glass when it was part of a traveling exhibit. Based on pictures as well as public viewing, it is apparent that the coin has been harshly cleaned at some point, a practice which was common at museums (including the Smithsonian Institution) in earlier times. For a coin such as this, however, the grade holds less importance since there are no other examples known to exist. 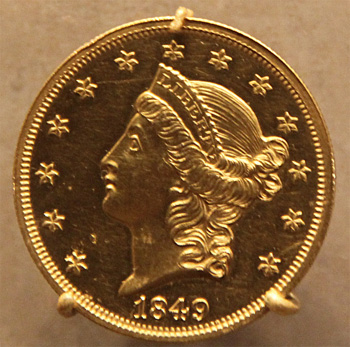 The approximate value of the 1849 Double Eagle is difficult to assess. Estimates have included the aforementioned $15 million figure and ranged as high as $20 million. Since it is a unique specimen and holds historic status as the first issue of a popular denomination, many experts feel that the coin should hold the highest value of all United States coins. If the coin were to ever be sold publicly, which is virtually impossible, it would most likely be a record-breaking event.

There is one value from more than a century ago that is interesting to note. Before the only known specimen was transferred to the Smithsonian Institution, it resided within the Mint Collection. The Mint had rebuffed numerous offers to purchase the coin, but the most well-known was an offer of $35,000 made in 1909 by J.P. Morgan. At the time, this represented an enormous amount. Other important coins such as 1804 Silver Dollars rarely sold for more than $1,000. Taking those relative values into account and translating into modern dollars, the offer might have been the equivalent of as much as $50 or $70 million.