The 1804 Draped Bust Silver Dollar is often referred to as the “King of American Coins.” With a storied history and only fifteen examples known to exist, the coin captures attention and sparks the imagination. Its rarity has been touted amongst coin collectors for more than 150 years and awareness of the issue even reaches the general public. Any offering of the few privately owned pieces brings fresh waves of press coverage, publicity, and prices stretching into the millions. 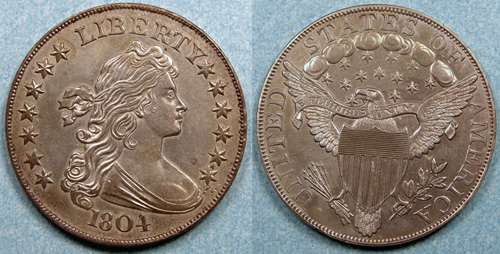 Although the coins carry the 1804 date, none were minted in that year. In fact, the earliest examples were not struck until 1834, and the final examples may have been struck as late as the 1870’s. The coins were initially produced for the purpose of creating diplomatic gifts during the administration of President Andrew Jackson. In later years, the coins were struck under less legitimate circumstances.

In a letter dated November 11, 1834, the Secretary of State informed the Mint Director that President Jackson had requested a complete set of coins to be sent to the King of Siam and the Sultan of Muscat. The letter requested “duplicate specimens of each kind now in use, whether of gold, silver, or copper.” The Mint interpreted the letter to mean specimens of each denomination currently authorized, rather than each denomination currently in production. At the time the silver dollar had not been struck since 1804, although those silver dollars had actually carried the 1803 date. To fulfill the request, the Mint created new dies carrying the 1804 date and struck a small number of coins. Through this unique set of circumstances, the 1804 Silver Dollar was created.

The 1804 silver dollars carry the so-called Draped Bust design, by Robert Scot. This design had been used for circulating silver dollars from 1798 to 1803 and experienced a number of changes throughout the series. The obverse features a depiction of Liberty, facing right, with her hair lightly bound and her bust draped. An arrangement of stars is seen between the inscription LIBERTY and the date. During the series the number of stars changed from 15 to 16, representing the number of states, and later reverted to 13, representing the original colonies. For the initial years of the series, the reverse design carried the image of an eagle encircled by a wreath. For the later years, the design was changed to a heraldic eagle. The coins include edge lettering reading HUNDRED CENTS ONE DOLLAR OR UNIT with decoration between the words.

After the initial striking of the 1804 Silver Dollars in 1834, more than two decades later around 1858, a Mint employee would illegally strike additional examples in order to sell them to collectors. These examples did not include edge lettering and were struck on underweight planchets. Even after this activity was halted, the dies found their way out of the Mint and were used to strike still more examples. These coins would be produced on proper planchets with the appropriate edge lettering applied. These three different strikings would later be identified as the “Class I”, “Class II,” and “Class III” varieties. 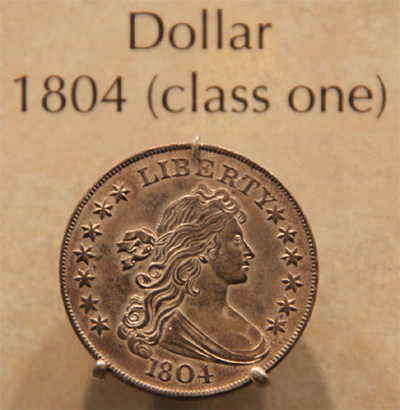 The “Class I” 1804 Silver Dollars were those originally struck for diplomatic gifts, although some were also struck for other purposes. The date of striking for these pieces took place sometime after November 11, 1834, when two sets had been requested by the State Department. These pieces were struck on planchets of the pre-1837 weight standard and have a lettered edge. The total mintage for this class is unknown, but at present eight examples are known to exist. One piece is in the Smithsonian collection (this example was retained for the Mint collection immediately after striking), another is in the collection of the American Numismatic Association, a third is in the Durham Western Heritage Museum in Omaha, and the five remaining examples are held in private collections. 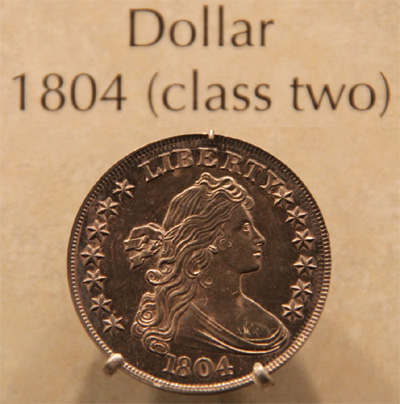 The “Class II” specimens are believed to have been produced around 1858, as an illegal product of Mint employee Theodore Eckfeldt. These pieces were struck on underweight planchets and have a plain edge. At least one was struck over an 1857-dated Shooting Thaler of Bern, Switzerland. Eckfeldt may have struck as many as ten or fifteen examples and apparently sold them at a healthy profit for $75 each. When the existence of the coins was discovered, Mint Director James R. Snowden ordered them to be destroyed. Only a single example managed to survive. It is currently held by the Smithsonian Institution, making this class uncollectable. 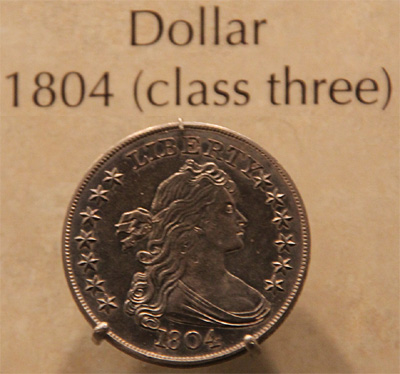 Finally, the “Class III” specimens would be produced starting sometime around 1859, or perhaps as late as 1860, and continuing into the 1870’s. It is believed that after Theodore Eckfeldt’s initial illegal strikings had been discovered, he had retained possession of the coin dies. He would use the dies to strike additional specimens, this time on dollar blanks which he had managed to obtain from the coiner’s vault. These blanks were of the new weight and were meant to be used for the production of Seated Liberty Silver Dollars. Edge lettering would also be applied to this class to prevent easy discovery. There are six examples of this class known to exist. Three reside in museum collections, including the Smithsonian Institution, which owns one example of each class. The remaining three examples are held in private collections. Four of the six known examples display artificial wear, likely done to give the coins the appearance of legitimate mint products.

As there are only a total of fifteen genuine 1804 Silver Dollars known, it is not too difficult to determine the finest known. Determining the value, however, is much more difficult due to the infrequent public offerings. A total of eight are currently held by private collectors, with the majority being Class I pieces. When sold at public auction there is typically no noticeable difference in price between a “Class I” and a “Class III” coin. As mentioned, only a single example of the “Class II” coin is known to exist and resides within a museum collection.

The finest known “Class I” 1804 Silver Dollar is the so-called Watters-Childs specimen, graded by PCGS as PR-68. This is believed to be the example presented to the Sultan of Muscat in 1834. The coin last sold in April 1999 for an amazing $4.14 million, a record price for this issue and among the highest prices paid for a United States coin at public auction. The second finest “Class I” example is graded PCGS PR-67 and resides within the King of Siam set. This is the only complete 1804/1834 presentation set still in existence and even includes the original wooden box. It is believed that this set has privately sold for as much as $15 million.

Among the “Class III” specimens, the finest known pieces are those within the Smithsonian and ANA Museum collections, graded PR-63 and PR-60, respectively. The finest known example within a private collection is the Adams-Carter specimen, which is graded PCGS PR-58 and last sold in April 2009 for $2.3 million.