The 1802 Draped Bust Half Dime (Buy on eBay) is recognized as a prized rarity within American numismatics. It is unknown in uncirculated grade and only 35 pieces are estimated to have survived from the original mintage. Auction appearances are infrequent, with problem-free examples usually attaining six-figure prices. The issue had been recognized as the “King” of the half dime denomination until the later discovery of the unique 1870-S half dime in 1978.

The United States half dime traces its origin back to the Coinage Act of 1792, where it was authorized as the smallest silver denomination. In that same year a limited number of “half dismes” were struck, before there was even an official Mint building. These early pieces are sometimes considered to be patterns, although many apparently circulated within the early United States. Half dimes were struck in greater quantity in 1794 and 1795 with the Flowing Hair design. 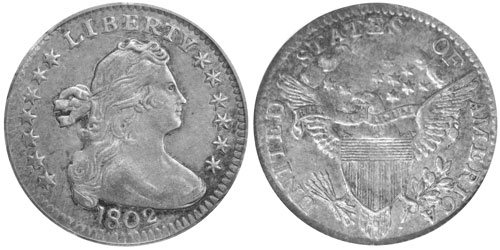 After two years of issue, a new obverse design was adopted for the denomination featuring an alternative portrait of Liberty, which is said to have been proposed by Gilbert Stuart and designed by Robert Scot. The iconic Liberty figure is depicted with her hair bound by a ribbon and her bust partially draped, leading the identification of the series as Draped Bust Half Dimes. The coins were issued for two years bearing the reverse design of the previous series before a new design was adopted featuring a heraldic eagle.

During these early years of production, the output of half dimes had been somewhat regular, although the denomination was not often requested by private silver depositors. As the smallest silver denomination of the time, it was the silver coin most likely to be encountered by the general public within commerce. This served as the backdrop for the extremely low mintage of the 1802 half dime and the high attrition rate experienced due to the impact of circulation and later melts.

The total recorded mintage for the 1802 Draped Bust Half Dime is a mere 3,060 pieces, with only a single die variety known. From this number, there are currently 35 recorded examples known to exist in all grades, or just above 1% of the original mintage. The extreme rarity of the 1802 half dime was recognized once the hobby of coin collecting started to gain momentum in the 1850’s. The stature of the rarity was assured in 1863 when an example of the coin sold for a higher price than the finest known 1794 silver dollar.

An interesting observation which can be made when studying this issue is that the current roster of higher-grade examples often have pedigrees dating back to the 19th century. This illustrates that these pieces were cherished early on and carefully preserved over the years. Once in a great while, an unrecorded specimen might be discovered in the ground, in a dealer’s junk box (this actually has happened with some low-end examples), or in a family’s holdings. These discoveries have mostly occurred for examples in lower grades or damaged condition, making it unlikely that the condition census for this issue will be altered much from its current state.

The finest known 1802 half dime is an example that has been graded PCGS AU-55. This is followed by single examples graded by PCGS as AU-53 and AU-50. The NGC census also shows three examples graded AU-50. As is always the case, the figures may be inflated by resubmissions of the same coin. Notably, there have been no pieces certified in uncirculated condition by either service.

Below the AU level, VF-XF pieces remain extremely rare, possibly numbering less than 10. Below that, the balance of coins are found in AG to VG grades, often damaged, cleaned, or with other problems. These account for as much as two dozen pieces within the total known population. When this issue makes an appearance at auction, it is generally these lower grade or problem pieces that are offered.

The value of any 1802 half dime is difficult to determine because of infrequent offerings and the impact of the overall eye-appeal and the demand at the time of sale. This is true for most United States coins, but it seems to be on the extreme end of the spectrum for this issue. One example graded PCGS XF-45 sold for $299,000 at an auction in 2006. This was followed three years later by the sale of a different coin carrying the same grade of PCGS XF-45, which sold for the significantly lower price of $195,500.

As for the lower end examples that are more frequently offered, prices are influenced by the nature of any problems as well as overall eye appeal. In the current market, any 1802 half dime regardless of condition tends to sell for at least $15,000. Problem free coins which receive a numerical grade from PCGS or NGC can typically sell for $100,000 or more.