The 1877 Indian Head Cent (Buy on eBay) is considered to be the classic key date coin of the series. Despite not having the lowest mintage, relatively few examples of the coin have survived, leading to the issue’s elevated status and value across all grade levels. Choice examples, particularly with original red mint luster, remain in high demand with collectors. 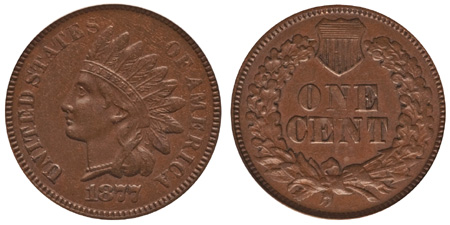 The Indian Head Cent was introduced in 1859 and struck in considerable numbers until 1909. The design for the coin was created by James B. Longacre and would become one of the most enduring of its era. The obverse features a depiction of Liberty wearing a Native American headdress, which some sources say was based on the designer’s daughter Sarah. The original reverse design featured a wreath of laurel leaves, which was later replaced with a wreath of oak leaves with a shield at the top.

For the first few years following the introduction of the series, circulation was relatively widespread. This changed during the years of the American Civil War when coinage struck in precious metal and even cents struck in copper-nickel and bronze were hoarded by the public. After the Civil War concluded, the cents would return to commerce. However, because of the legal tender limit of four cents authorized in the mid 1860’s, there was a legal reason to refuse cents in large quantities. The Mint Act of 1871 authorized the Mint to redeem the cents, both copper-nickel and bronze, to be melted and reissued. This occurred in relatively large quantities in the early 1870’s.

In 1874, the Mint decided that most of the redeemed bronze cents could simply be reissued, rather than melted and restruck. It was this decision that would eventually lead to the scarcity of the 1877 Indian Head Cent a few years later. Almost ten million bronze cents were redeemed that year, and virtually the same amount was reissued into circulation. As a result, a large mintage of new cents was not necessary.

The reported mintage of 1877 Indian Head Cents for circulation is 852,500 pieces, with an estimated 900 proofs coins struck for collectors. This was a sharp drop from the previous year, when the Mint produced almost 8 million cents, and even greater decline from mintages of the early 1860’s and mid 1870’s.

Despite the somewhat high mintage for a key date coin, the number of pieces that have survived to this day is much lower than the mintage suggests. In all grades, perhaps no more than 5,000 examples are still known to exist, and perhaps only 10% of these are still in uncirculated condition. Proofs are relatively more available, with approximately two-thirds of the original mintage remaining.

There are several possible explanations for the scarcity of the 1877 Indian Head Cent. The first is that all coins circulated extensively and were later melted. However, this explanation seems unlikely since even collectors of the late 19th century had considered the issue to be rare. Another possibility is that the mintage was incorrectly recorded, which is known to have occurred at the Philadelphia Mint from time to time. Perhaps the most likely explanation is that the mintage did occur, but the majority were melted rather than released into circulation. Another mystery related to the issue is that only two die pairs are known to exist when die life during this period was no more than a few hundred thousand coins.

The finest Proofs are graded PR-67 RD by both PCGS and NGC, while a few examples in lower grades have been certified with the cameo designation. These proof versions usually trade for lower values than the best Mint State examples, although top graded specimens remain in high demand. An example graded PCGS PR-67 RD with CAC verification realized a price of $72,001.20 in 2018. Examples graded PR-65 RD can be found for less than $10,000.