The 1893-S Morgan Silver Dollar (Buy on eBay) is recognized as the absolute key date coin within the popular Morgan Dollar series. Not only does the issue boast the lowest mintage of the series at 100,000 pieces, but most surviving examples are found in lower grades, with only a distinct minority in uncirculated condition. Unlike other low mintage Morgan Dollars, no major hoards have ever been discovered. Unsurprisingly, examples are always in demand, and uncirculated pieces generate significant interest when they appear at auction. 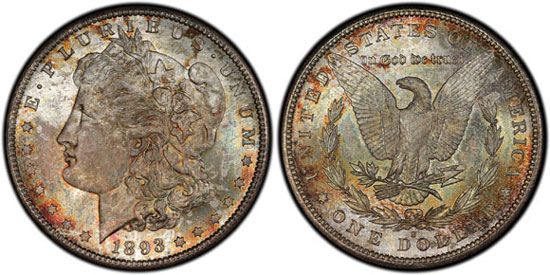 The Morgan Dollar was designed by George T. Morgan and features the head of Liberty, facing left. She wears a Phrygian cap with the word LIBERTY on the hair band. She is further adorned with a wreath composed of American agricultural products. The image of Liberty is believed to have been based on Anna W. Williams of Philadelphia, who had sat for Morgan multiple times during the design phase. The obverse is completed with an arrangement of 13 stars, the motto E PLURIBUS UNUM, and the date. On the reverse of the coin, a bald eagle is shown with outstretched wings, encircled by a wreath. The eagle grasps a bundle of arrows and an olive branch. The motto IN GOD WE TRUST appears above the eagle, with the additional inscriptions UNITED STATES OF AMERICA and ONE DOLLAR surrounding.

Throughout the Morgan Dollar series, various acts of legislation had a major impact on the mintage levels as well as survival rates for individual issues. The Bland-Allison Act of 1878 created the series and mandated that the U.S. Treasury purchase between two and four million dollars of silver each month to be minted into silver dollars. This led to large scale production of the denomination regardless of the actual demand for the coins in circulation. In 1890, the Sherman Silver Purchase Act would increase the required purchase of silver to 4.5 million ounces per month, continuing the massive production of silver dollars. The act would be repealed in 1893, leading to a drastic reduction in mintage levels. Finally, the Pittman Act of 1918 would call for the melting of up to 350 million silver dollars in storage, followed by the recoinage of the same amount at a later date.

Based on mint records, in January 1893 the San Francisco Mint struck and delivered 100,000 silver dollars. Following the repeal of the Sherman Silver Purchase Act in April 1893, no additional silver dollars would be struck at the San Francisco Mint for the remainder of the year. Without the silver purchases required by the Act, there was no longer a need to produce such large quantities of silver dollars especially with millions already held in storage across the country.

Most sources suggest that the 1893-S Morgan Dollars were immediately released into circulation. However, some suggest that the majority of the coins did not circulate until the 1920’s, when they were supposedly released in the mountain states. Whatever the true story, the issue circulated heavily and it is believed that perhaps 10,000 of the original mintage has survived. Besides attrition through circulation and other sources, it is very well possible that a portion of the mintage was melted under the Pittman Act of 1918.

The 1893-S Morgan Dollar was one of the few issues of the series which was not included on a major scale in the treasury hoards released during the 1950’s and 1960’s. Q. David Bowers, who has been active in American numismatists since the 1950’s, only recalls hearing of a single group of 20 pieces that turned up in Montana. These were all quickly dispersed into the market. Rumors had circulated that a full bag of uncirculated 1893-S Morgan Dollars was included in the Redfield hoard, one of the most famous coin hoards ever formed. However, not a single example from the hoard has been located and the rumor appears to be a case of wishful thinking.

Due to the rarity of this historic issue, counterfeits do exist. While certification is highly suggested, there are a number of key diagnostics that can be used to authenticate genuine examples of the 1893-S Morgan Dollar. Two reverse dies were used to strike the coins, and both have a distinctively placed mintmark, either upright or slightly tilted to the right. On the obverse, the placement of the “1” in the date should be directly above a denticle. Finally, every genuine example of the key date should feature a die line in the “T” of “LIBERTY”.

The absolute finest known 1893-S Morgan Dollar is the Vermeule specimen, graded by PCGS as MS-67. This is the only coin currently holding this grade from either of the top grading services. This coin was auctioned in November 2001 for $414,000 when it was not yet certified and graded. The coin appears to have been graded shortly after the auction, and subsequently received a CAC verification sticker. In October 2008, it was reported that the coin changed hands at a price in excess of $1 million, which would represent the record price for the issue.

The grading firm PCGS has graded five examples of the key date as MS-65, with one of these examples most recently selling at Sotheby’s for $735,000. This is followed by four pieces graded MS-64 and approximately two dozen pieces graded between MS-60 and MS-63. PCGS has encapsulated one example as MS-62 PL for proof-like surfaces. This is the finest known example with the “PL” designation and only one of a handful of examples for this issue which display reflective surfaces.

The NGC census now shows a single coin graded MS-66, followed by two examples graded MS-65, and nine graded MS-64. Between MS-60 and MS-63 there are 15 pieces shown. Some of these numbers, particularly for the MS-64 grade, appear to be impacted by resubmissions.

There is an interesting story behind the coin currently encapsulated as NGC MS-66. This coin had previously been graded by NGC as MS-67. Prior to encapsulation and grading, it had been a part of several famous collections and was considered to be among the finest known. However, one of the owners made the decision to conserve the coin, removing the original toning and impairing the eye appeal. After conservation, the coin was holdered as NGC MS-67, although many disagreed with the grade. The coin would sell at auction in August 2011 for $546,250. Shortly following the auction, the coin was downgraded to its current grade of NGC MS-66.

Circulated examples of the 1893-S Morgan Dollar can be found with regularity, although they are still highly prized by collectors. As this issue was heavily circulated, most pieces are in Good and Very Good grades, although Fine and Very Fine examples can be found with some searching. Extremely Fine and About Uncirculated examples are rarities, and sell for five-figure amounts whenever they are offered. At the low end, a heavily circulated 1893-S Morgan Dollar with problems such as cleaning can usually be found for a few thousand dollars.