The 1894-S Barber Dime is one of the great rarities of American coinage. Besides having an original mintage believed to be just 24 pieces, this issue is surrounded by mystery, with the precise circumstances of its creation unknown. No other Barber type coin can boast such absolute rarity and intrigue. The value of the coin is similarly impressive, with most examples typically changing hands for prices in excess of $1 million. 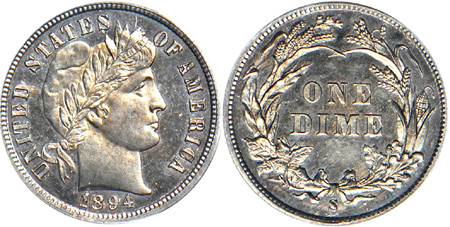 The Barber Dime was introduced in 1892, when it replaced the long running Seated Liberty design. Named for its designer Charles E. Barber, the obverse features the head of Liberty facing to the right and adorned with a cap and laurel wreath. The inscription UNITED STATES OF AMERICA surrounds, with the date beneath. The reverse design remained the same as the prior series, consisting of an agricultural wreath with the denomination ONE DIME placed at center. The mint mark appears below the base of the wreath.

During the course of the series, coins were struck at the Philadelphia, Denver, New Orleans, and San Francisco Mints. The mintage levels for regular issues ranged from a low of 440,000 to a high of more than 20 million coins. The 1894-S stands apart from all other issues of the series for its impossibly low mintage of just 24 pieces.

As with some other major rarities in American numismatics, the full story of the 1894-S Barber Dime is not known. The coins were listed in the account book of the San Francisco Mint in 1894, in accordance with standard procedures in place at the time. All known examples are believed to have been struck as proofs, or at least specimen strikings. The special production process involved was not typically employed at the San Francisco Mint, but usually limited to a small number of coins struck in Philadelphia. The production of proof coins at branch mints usually only happened to mark extraordinary events. Since there were no such events in San Francisco in 1894, there does not seem to be much reason for the special striking of a few dozen dimes.

The first 1894-S Barber Dimes came out of the woodwork in 1900 when The Numismatist published an article about them. Since then, only a very limited number of the original mintage has turned up, and it seems unlikely that additional examples will be found more than a century after their original mintage.

The exact mintage of the 1894-S Barber Dime is known to collectors and numismatic researchers from the account books of the San Francisco Mint. A total of 24 dimes are reported to have been struck during the first half of 1894, presumably in June. This was an extraordinarily low mintage compared to other years, when the San Francisco Mint was responsible for the output of at least a million dimes per year. So why was this minuscule number of coins struck?

One theory suggests that John Daggett, the superintendent of the San Francisco Mint in 1894, produced and distributed the small group of 1894-S dimes to seven highly ranking individuals (presumably bankers). He gave three pieces to each individual and kept three for himself, which he later gave to his daughter. This theory does not seem to hold up to scrutiny, as it is known that two examples from the original production went to the assay commission and were later melted, which would have left only 22 examples of the coin. However, there is a firsthand account from the Superintendent’s daughter Hallie Daggett who recalled her father giving her three of the 1894-S dimes.

An alternate theory appeared as part of a San Francisco Bulletin article written in 1895, shortly after the coins would have been produced. The article mentions a report from a Mint employee that a very small number of dimes were struck to balance the books. The theory was first brought to the attention of numismatic researchers within an article written in 1928 by Farran Zerbe. If the theory is true, it would have been a unique situation since it had never happened at any of the other mint facilities. Furthermore, the face value of the 24 dimes amounts to more than the alleged 40 cents difference.

After the curiously tiny mintage of the 1894-S Barber Dime, no further coins of the denomination would be produced at the San Francisco Mint that year. Regular production would resume in the following year when more than one million dimes would be struck.

Extensive research is often performed on the surviving specimens of extremely rare coins. However, when it comes to the 1894-S Barber Dime, there is some dispute as to how many pieces have actually survived. There is reliable information on nine surviving examples, all graded as specimen strikings, per the listing of William A. Burd, among others. One or two more examples have appeared in census listings and some auction descriptions, but the actual existence of these has been disputed by some, including Burd.

The finest of the nine 1894-S dimes confirmed to exist is generally considered to be the James Stack specimen, currently graded PCGS PR-66 with CAC verification. When the coin was formerly graded as NGC PR-66, it was sold by David Lawrence Rare Coins for $1,322,500 in 2005 to become part of the Richmond Collection. The coin was subsequently sold in a private transaction for $1,900,000. After being crossed over into the current PCGS PR-66 holder, the same specimen sold at auction for $1,997,500 in 2016.

Two additional specimens stand out in the roster of known 1894-S Barber Dimes. Both are well worn, and were either used as pocket pieces in the early 20th century or circulated heavily before their true value was discovered. The first is graded Good-4 by NGC, while the other grades About Good-3. The former is often nicknamed the “ice cream” specimen. It is presumed that it was the coin which Hallie Daggett, daughter of the former Superintendent of the San Francisco Mint, spent on an ice cream after her father gave her the three dimes. While it is unknown if the story is true, it is one of the many mysteries of this great American rarity.