Few coins catch the mind of the American numismatist like the 1913 Liberty Nickel, one of the rarest American coins with only five examples known to exist. Technically, this issue might not be classified as a true coin intended for circulation, but rather a fantasy piece struck under mysterious circumstances. Nonetheless, the coin has long fascinated collectors and gained even greater fame after it was the focus of a popular American television show. The known examples of this numismatic rarity carry impressive pedigrees and generate substantial interest on the infrequent occasions when they are offered for public sale. 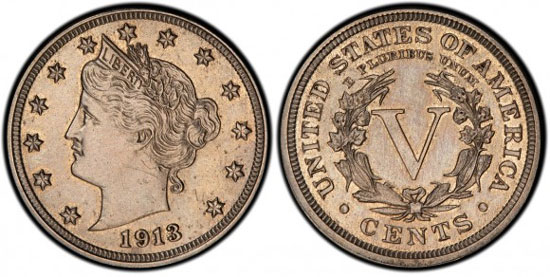 First of all, the 1913 Liberty Nickels never should have existed in the first place. The Liberty Nickel series was minted for circulation from 1883 until 1912, with the Buffalo Nickel introduced in 1913 and soon found in the pockets of Americans nationwide. The scarcely known facts indicate that by the end of 1912 it had already been determined that a new design would be introduced on the nickel denomination and production of the prior design would be halted at all mint facilities. This was despite the fact that new 1913-dated dies carrying the old design had already been shipped to the San Francisco Mint.

Exactly how 1913 nickels came to be produced with the older design remains unknown. For many rarities, the month or even the exact date of production is known, but none of that applies to the present case. In fact, it can only be speculated as to whether the coins were actually struck in 1913, or during the last few months or days of 1912.

The existence of 1913 Liberty Nickels was first suggested in 1919, when Samuel W. Brown placed an advertisement within a numismatic publication offering to buy examples of the coin for $500. It is unknown whether he may have already had the coins in his possession at this point and only placed the advertisement to gain publicity or legitimize the existence of the coins. The following year, Brown would publicly display an example of the 1913 Liberty Nickel. He would later reveal that he owned five examples, supposedly the entire mintage.

It can be reasonably assumed that Brown did not strike the coins himself. Although he had been employed by the Mint, he only served as a clerk and it is unlikely that he would have had the experience necessary to strike the coins. Brown may have known others within the Mint who either helped him with the coinage or told him about the creation of these coins which never should have existed. Various theories about the exact circumstances have been suggested, but the truth will probably never be known.

After all five of the 1913 Liberty Nickels were publicly displayed for the first time in 1920, the coins would pass to various owners. In the early 1940’s, Eric P. Newman would come into possession of all five coins, representing the final time that one person owned all known examples. From this point, the coins once again passed to different owners, including some well-known coin collectors and dealers such as B. Max Mehl, King Farouk, and Abe Kossoff. Earlier owners of the coins had also included Stephen K. Nagy, Wayte Raymond, and Colonel E.H.R. Green.

The most famous example was the one which starred in a 1974 episode of the television series Hawaii Five-O. The specimen featured in the show is considered to be the second finest known example. Rather than using a copy, the directors of the program decided to use this genuine example of the coin when filming selected parts of the episode. The appearance of the 1913 Liberty Nickel within this popular show garnered more fame and attention for this enigmatic rarity.

There are only five examples of the 1913 Liberty Nickel known to exist. Whenever one of these pieces comes to market, the roster of coins is often repeated with their various pedigrees. Of the five examples, the finest known is the Eliasberg specimen, which is graded PCGS PR-66. The remaining coins fall into lower grades, with the ANA specimen grading NGC PR-55 due to a previous owner’s habit of carrying the coin around for bragging or wagering purposes. The five known examples with their certified or estimated grade levels are shown below.

Notably, the 1913 Liberty Nickel would be the first American coin to break the $100,000 price barrier. In 1972, World Coin Investments paid this exact sum for the Olsen specimen, which would lead to the coin’s appearance on Hawaii Five-O. A few decades later, another specimen would represent the first American coin to break the $1,000,000 barrier. In 1996, dealer Jay Parrino would pay $1,485,000 at auction for the Eliasberg specimen. After changing hands a few more times, the Eliasberg specimen would eventually be sold for $5,000,000 to an anonymous collector in 2007, representing the highest reported sales price for this enigmatic rarity.

With two of the five known specimens of the 1913 Liberty Nickel held within museum collections, other auction appearances have been infrequent. After the auctions, these coins are often sold in private transactions and then remain off the market for lengthy periods of time. While the 1913 Liberty Nickel cannot be considered to be the rarest of all American coins, it is certainly one of the most famous and serves as a prime example of an issue which will always remain in demand due to its intriguing background.