The 1907 Saint-Gaudens Double Eagle (Buy on eBay) is considered to be one of the most beautiful coins ever struck by the United States Mint. The series design is the direct result of President Theodore Roosevelt’s desire for American coins to be as grand and beautiful as those of Ancient Greece. Over the course of about a decade, new designs would be created for each of the circulating denominations, ushering in what would be called the Renaissance era of United States coinage. The process would begin with the Double Eagle designed by renowned sculptor Augustus Saint-Gaudens.

The obverse design of the coin features a stunning full figure depiction of Liberty in flowing robes, holding an olive branch and lit torch. The background contains the rays of the sun and a small image of the United States Capitol dome. Forty-six stars encircle the image, representing the states in the Union at the time of issue. The date, initially expressed in Roman numerals, appears in the lower right with the designer’s initials placed prominently beneath. The reverse design features the image of a majestic eagle in flight. The sun appears below, with its rays extending upwards into the fields. The motto IN GOD WE TRUST initially did not appear on the coin, but was later added between the sun and its rays.

The relief of the coin, or the extent to which the sculpted images project outward, played an extremely important role in the history of the issue. From the start of the design process in 1904, there had been much correspondence between President Roosevelt, Augustus Saint-Gaudens, and various representatives of the Mint. Roosevelt referred to this project as his “pet crime” and was very much involved in various aspects of the creation of the coin. Before the design had even been determined, he had mentioned to Saint-Gaudens his desire for the twenty-dollar gold piece to use high relief, similar to the coins of Ancient Greece, which was much higher than contemporary American coinage.

The Mint, and in particular Chief Engraver Charles Barber, strongly opposed the idea of using high relief. This would require each coin to be struck multiple times, increasing both the time and cost of production. Later, when the first High Relief pieces were released into circulation, banks would complain that the coins did not stack properly since the devices were struck higher than the rims. All of this created long delays in finalizing the design, while its creator Augustus Saint-Gaudens struggled with stomach cancer. The Ultra High Relief patterns were the only Double Eagles of his design which would be struck during his lifetime. Modifications to the design to lower the relief would be executed by his assistant Henry Hering with further changes executed by Charles Barber.

During the first year of production, the 1907 Saint-Gaudens Double Eagles would be struck in three different reliefs. The first are the so-called Ultra High Reliefs, representing the first coins produced and those which most faithfully represent the designer’s vision. Technically, these are considered to be patterns, or test pieces struck before regular production commenced. The second version consisted of the High Relief coins, which were the first pieces struck for circulation. Even with the modifications to reduce the relief, these pieces were still considered too difficult to strike and were soon replaced. The third and final version had lower relief, more typical of United States coinage. This version would be produced in the greatest numbers and continue to be used with minor modifications for the duration of the series. 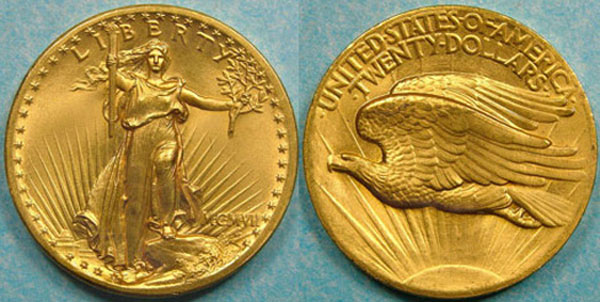 After the first and second group of Ultra High Relief coins had been produced, Augustus Saint-Gaudens passed away on August 3, 1907. President Roosevelt now grew extremely impatient, and ordered the coins to be struck and released within an extremely short timeframe. The relief was lowered to create the High Relief version of the coin, and production commenced in November 1907 with a total of 12,367 pieces struck for circulation. It took three to five strikes to bring out the full design of the coins. The Philadelphia Mint put every medal press into operation and used additional workers to run the presses day and night. The effort was worth it as the President was pleased with the result calling it “the best coin that has been struck for two thousand years.”

The High Relief 1907 Saint-Gaudens Double Eagles come in two distinct varieties, with either a Wire Rim or a Flat Rim. These varieties are the result of the use of two different collars. If the collar was loose, the extra metal would be forced between the collar and dies, creating a wire rim. Most coins are the Wire Rim variety, representing approximately two-thirds of survivors. The Flat Rim variety features a more beveled rim and can also be distinguished by raised lines running along the edge of the coin. Although the Wire Rim or Flat Rim variety is usually noted, it does not make much difference in the value or desirability of the coin.

Following the production of the experimental Ultra High Relief coins and the limited number of High Relief coins, the relief was lowered once again to make mass production more feasible. Chief Engraver Charles Barber modified the design to lower relief and also changed the date from Roman numerals (MCMVII) to standard Arabic numerals (1907). A total of 361,667 pieces were struck in low relief, making this version widely and readily available.

Since the 1907 Saint-Gaudens Double Eagles were immediately prized for their beauty by collectors and the general public alike, a large number have managed to survive in high grades. This is the case for the Ultra High Reliefs as well as High Reliefs, which are both represented by a number of superlative examples.

The finest known Ultra High Relief is a single example currently graded PCGS PR-69. The coin features a stunning, sculpted, unblemished appearance and is arguably unsurpassed by any other United States coin in terms of artistic beauty. The coin changed hands in 1974, 1980, and was purchased through a private sale in 1999. It was then offered at auction in 2005 and brought a final price of $2,990,000. A few years later in 2012, the coin was sold at auction again for the slightly lower price of $2,820,000. 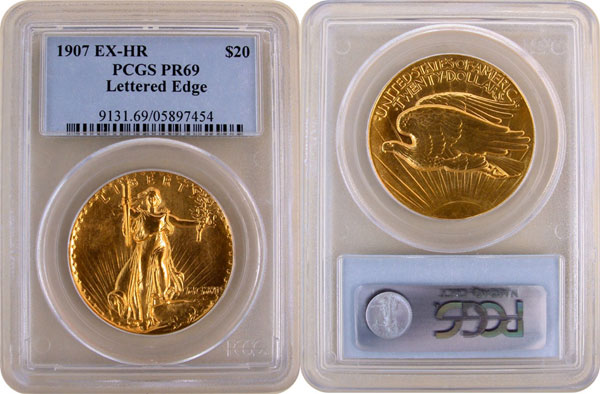 Besides the finest known specimen, other Ultra High Reliefs have survived in extremely high grades. Although population reports show higher figures due to resubmissions or crossovers, there are approximately four pieces which have graded PR-68. One of these pieces was originally presented to the designer’s widow Augusta Saint-Gaudens in 1908 and includes the initials “ASG” on the edge. When this historic piece was auctioned in 2015, it realized a price of $2,115,000. Other Ultra High Reliefs have regularly brought over a million dollars at auction. Even a circulated specimen in EF condition sold for almost a half million dollars in 2005. As can be expected of a coin issue of this rarity, offerings are very scarce and is always considered to be among the numismatic highlights of any given year.

The 1907 High Relief Saint-Gaudens Double Eagles are not as rare as the patterns that preceded them but remain extremely popular regardless of condition. At least two examples exist in the top grade of MS-69 or PR-69, although the designation as proof is controversial. The grading firm PCGS does not recognize proofs for the High Relief issue, while rival firm NGC does. The identification takes into account not only the sharpness of strike and surfaces of the coin, but also the spacing of the edge lettering. However, it is very well possible that these were only struck more often on exceptionally nice planchets, rather than true proofs.

As might be expected, the low relief version of the coin is much more plentiful and affordable due to its high mintage. Thousands of pieces have been graded by the major services at the gem level of MS-65, and these can be purchase for under $4,000. Only at the MS-67 level does the issue become more difficult to acquire, with about two dozen pieces graded as such. These typically sell for around $50,000. The single finest known low relief version is a piece graded PCGS MS-68, which sold for $120,000 in 2020.