The 1870-CC Liberty Double Eagle (Buy on eBay) is a fascinating rarity from a number of standpoints. First of all, the coin represents one of the first issues produced at the Carson City Mint, which has long captivated collectors for its ties to the Wild West. Secondly, with a production of just 3,789 pieces, the issue ranks as the lowest mintage Carson City Double Eagle and is among the lowest mintage coins of the Liberty Double Eagle series. Finally, and most importantly, the issue saw extremely heavy attrition from circulation leaving no surviving uncirculated examples and likely ten or fewer coins at the About Uncirculated grade level. This coin is often cited as the top conditional rarity of the series. 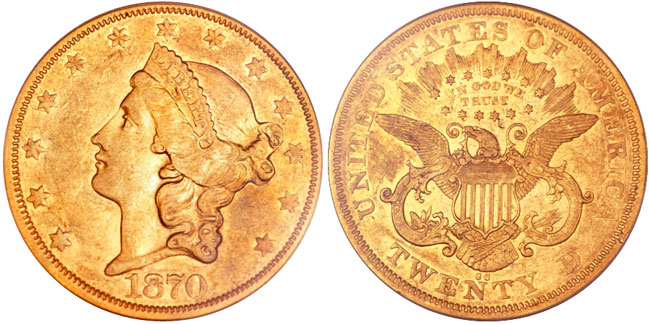 The San Francisco Mint had begun operations in 1854 as the first branch mint on the west coast. This facility was opened as a direct result of the California Gold Rush. The Carson City Mint would become the second branch mint on the west coast after it was authorized by Congress in 1863. This facility was created in response to the discovery of the Comstock Lode, a huge silver deposit in the Utah Territory, located in the present-day state of Nevada. Groundbreaking for the facility would take place in 1866, with the building finally completed in 1869. In 1870, the Carson City Mint would begin producing the first coins with the now famous “CC” mint mark.

The main focus of the Carson City Mint would be silver coins, with the facility producing the Dime, Twenty-Cent Piece, Quarter, Half Dollar, Trade Dollar, and Silver Dollar. The Morgan Silver Dollars struck between 1878 and 1893 would come to be a focus for many collectors. The facility would also strike gold coins, producing the Half Eagle, Eagle, and Double Eagle denominations. In total, there were 50 individual silver coin issues and 57 individual gold coin issues struck during the years of operation from 1870 to 1893.

The 1870-CC Double Eagle was struck during the first year of operations at the Carson City Mint and saw a mintage of just 3,789 pieces. These coins circulated heavily throughout the Utah Territory and many likely ended up being melted at a later date. As a result, an estimated 50 pieces remain in existence, with the majority of these showing extensive signs of circulation, heavy abrasions, and bag marks.

The low mintage for the issue was the result of a few important factors. First of all, at this period in history the number of coins struck was directly linked to the amount of gold or silver that was provided to the Mint by private depositors. Much of the precious metals that were discovered on the West Coast continued to be shipped to the San Francisco Mint, where the bullion could be converted into any denomination that was requested. Research has shown that the amount of gold and silver deposited at the Carson City Mint remained relatively small during the earliest years of operation.

Another contributing factor to the low mintage was the inexperience of the workers at the Carson City Mint. This was a newly opened facility in a remote area of the United States. Equipment and experienced workers had to be brought in from other locations, and while San Francisco was in the vicinity, it still was a long trek. As a result of these factors, early production was slow and mintages remained at constrained levels, especially when compared to later years.

More than any other issue of the series, the 1870-CC Liberty Double Eagle was greatly impacted by extensive circulation. There are no known examples which have survived in uncirculated condition. Furthermore, of the estimated 50 pieces in existence, perhaps as few as ten examples have survived in AU condition, leaving very few options for the discerning collector.

In an unusual situation, the finest known example of the 1870-CC Double Eagle is presently missing. The coin was consigned to auction in 2012, after having been in the possession of a family for over 50 years. In preparation for the auction, the coin was sent to NGC where it was graded AU-58, making it the single finest known example. The coin was then shipped to PCGS where it failed to crossover at the same grade. Finally, in the shipment back to the auction house, the box arrived empty. Due to the circumstances of the disappearance, the coin is presumed to have been stolen and despite a large reward has never been recovered.

Besides the missing coin, the next finest known is a single example graded NGC AU-55. This piece last appeared at auction in 2009 when it sold for $414,000. There are three known examples graded AU-53, of which one sold for $345,000 in 2012 and another sold for $411,250 in 2014. There are approximately five examples graded AU-50, which periodically change hands at slightly lower prices. The population reports at the two grading firms show higher numbers than the actual number of coins believed to be in existence due to resubmissions to the same grading firm or crossover attempts to the rival firm.

In lower grades most survivors are found in VF to XF condition, indicating that they circulated heavily for a number of years. Besides wear from circulation, soft strikes and other problems are virtually always present. Nonetheless, such problems only have a minor effect on the value due to the great rarity of the issue and its status as one of the most famous Double Eagles struck by the United States Mint, and in particular the Carson City Mint. Even cleaned or heavily circulated examples tend to sell for at least six figures.