Although the Peace Dollar series boasts a number of significant conditional rarities, the 1928 Peace Dollar (Buy on eBay) is widely recognized as the classic key date coin. With 360,649 pieces struck at the Philadelphia Mint, the issue marks the lowest mintage of the series and carries a premium across all grade levels. The issue becomes particularly scarce above the gem grade level. 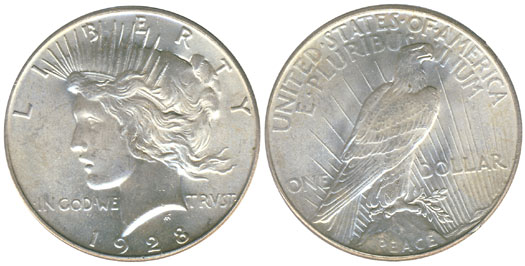 The Peace Dollar was introduced as the successor to the popular Morgan Dollar series. A new design for the silver dollar had been suggested at the end of World War I to commemorate the restoration of peace. The American Numismatic Association played a role in building support for the new commemorative peace coin and Congress introduced legislation calling for a new design. Ultimately, the legislation was unnecessary as the Morgan Dollar design had been in use for more than 25 years, making the denomination eligible for a change. A competition would be held by the Commission of Fine Arts to select the new design. From the group of nine prominent artists, the winning entry was created by relative newcomer Anthony de Francisci.

The obverse design would feature a rendition of Liberty based on the designer’s 22-year-old wife Teresa Cafarelli. Liberty appears facing left and wearing a tiara, with her hair bound in a bun and several strands flowing lightly in the wind. The reverse design features an eagle perched upon a rock bearing the word PEACE. The eagle clasps an olive branch in its talons and rays of sunlight emanate from the lower right. The initial design concept had featured the eagle breaking a sword to symbolize the end of war through the destruction of its implement. However, this was altered to the more recognizable symbol of an olive branch. Peace Dollars would be struck in high relief for the first year of the series in 1921, before the relief was lowered for the remaining years of the series.

The mintage levels for various issues of the Peace Dollar series were heavily influenced by the Pittman Act of 1918. This act authorized the melting of up to 350 million silver dollars for conversion to bullion and sale to Great Britain or for use in the production of smaller denomination silver coins. The same quantity melted was required to be replaced with newly minted silver dollars produced from the output of American mines. Ultimately a quantity of 270,232,722 silver dollars were melted, which meant the same quantity needed to be minted in the years following the war.

To fulfill the requirements of the Pittman Act, the United States Mint first resumed the production of Morgan Dollars, which had not been struck since 1904. In 1921 more than 80 million Morgan Dollars were produced across three mint facilities. Heavy production would continue when the Peace Dollar design was adopted, keeping mintages at high levels despite the fact that new production was not necessary based on the needs for circulating coinage. This situation would continue until the requirements of the act were completely fulfilled.

The Philadelphia Mint struck 1928 Peace Dollars between the dates of April 13 and 20, 1928. Production stopped when the Mint had struck exactly enough coins to replace the silver dollars which had been melted under the Pittman Act. The 1928 Peace Dollar ended up with a mintage of 360,649 pieces, representing the lowest mintage of the series by a wide margin. After 1928, production of the silver dollar would not take place during the next five years. Peace Dollars were next struck in 1934 and 1935, which represented the end of the series and, in fact, the final United States silver dollars released for circulation.

Since the low mintage of the 1928 Peace Dollar was recognized early after release, many examples have managed to survive in uncirculated condition, however most fall into the lower uncirculated grades. There have been thousands of examples graded between MS-60 to MS-64 by the PCGS and NGC grading services. At the MS-65 grade level, the populations thin considerably, with around 400 examples graded across both services. There are about two dozen examples at the MS-66 grade level. The absolute finest known is a single specimen graded PCGS MS-66+.

The highest reported auction price for the 1928 Peace Dollar is $48,875 paid in 2011 for a PCGS MS-66 example carrying the Jack Lee pedigree. The same coin sold for the lower price of $39,950 at its next auction appearance in 2015. Recent prices for other high-grade examples include separate sales of PCGS MS-66 graded coins at $33,600 in 2019 and $26,400 in 2020. Offerings at this grade level are relatively infrequent with only a few opportunities per year.

Sales occur much more frequently at the MS-65 grade level, and prices can vary widely based on the eye-appeal and other attributes of the particular coin. At the lower end, some examples have sold for just above $2,000. At the higher end, an example graded PCGS MS-65+ with CAC verification reached an auction price of $12,000 in 2020.

In circulated grades, prices range from a few hundred dollars for a well circulated piece to approximately $400 for a quality About Uncirculated specimen.