The Washington Quarter was introduced in 1932 to commemorate the 200th anniversary of the birth of George Washington. Although initially intended to be issued for a single year, the design proved so popular that it remained in use as an ongoing series. The same obverse portrait would also carry over through two subsequent series up to the present day. For the first year of issue, the 1932 Washington Quarters (Buy on eBay) were struck at the Philadelphia, Denver, and San Francisco Mint facilities. While Philadelphia struck a large number of coins, Denver and San Francisco struck considerably fewer, resulting in the creation of two well-known key date coins. 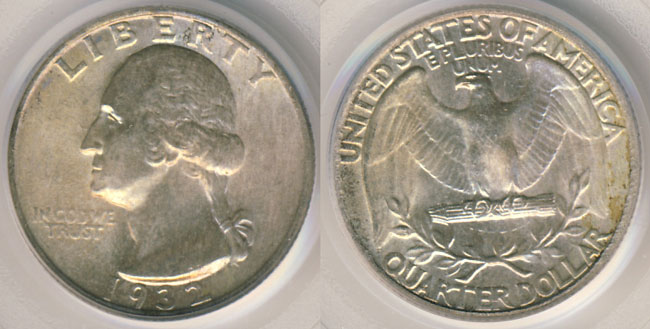 As early as 1924, plans had been discussed to issue a medal and commemorative half dollar to celebrate the upcoming bicentennial of George Washington’s birth. A competition was held in 1930, with Laura Gardin Fraser submitting the winning design. On March 4, 1931, Congress passed legislation which instead called for the issuance of a circulating quarter to celebrate the occasion. A second competition was held and 98 sculptors submitted more than 100 different models, which were reviewed by the Commission of Fine Arts and the Department of the Treasury. Once again, a design by Fraser was chosen, however, this decision was overruled by the Secretary of the Treasury who selected an alternate design by John Flanagan.

Flanagan’s design featured a bust of George Washington based on Jean-Antoine Houdon’s 1785 bust, which is now displayed at Mount Vernon. The portrait of Washington is facing left and surrounded by the mottoes LIBERTY and IN GOD WE TRUST with the date below. The reverse design features a bald eagle grasping a bundle of arrows with olive branches beneath. The inscriptions include UNITED STATES OF AMERICA, E PLURIUS UNUM, and QUARTER DOLLAR.

When the Washington Quarter was introduced in 1932, production levels at the United States Mint were impacted by the reduced economic activity stemming from the Great Depression. In fact, quarters had not been produced in the previous year of 1931 and would also not be produced in the following year of 1933. Production would take place in 1932, perhaps due in large part to the commemorative nature of the issue.

The Philadelphia Mint would strike a quantity of 5,404,000 coins. Most of these went into circulation, although enough coins were saved to make the issue readily available in lower uncirculated grades. The Denver and San Francisco facilities struck only minor quantities by comparison. These two issues would come to represent the lowest mintage issues of the series and also the only two issues with mintage figures below one million pieces.

The 1932-D Washington Quarter had a mintage of 436,800 coins, while the 1932-S Washington Quarter came in even lower at 408,000 coins. Despite the similarity in mintages, the Denver coins are at least twice as rare as the San Francisco coins in uncirculated condition. This is due to the impact of circulation, with the Denver coins circulating more widely. Still, neither coin is easy to find, and in gem grade and higher the issues represent conditional rarities.

As with other rare coins, counterfeits do exist for the branch mint 1932 Washington Quarters. Since the Philadelphia issue of the same year is more readily available, a number of circulated pieces have been seen with an added mintmark. In order to discern counterfeits from genuine examples, care should be taken in examining the mintmark and surrounding area. Added mintmarks will often have the wrong style or placement, and the area around the mark will often show signs of tooling, such as heat induction from when the mintmark was “applied” to the coin. Authentication is strongly advised when buying a 1932-D or 1932-S Washington Quarter in higher grades.

As mentioned, both the 1932-D and 1932-S Washington Quarters represent conditional rarities at the gem grade level and above. While the issues are obtainable in MS-65, at the next higher grade of MS-66 only a handful of pieces have been certified. No examples of these issues have been graded MS-67.

The 1932-D Washington Quarter is represented by approximately 110 examples graded MS-65 across the two grading services PCGS and NGC. Likely this figure includes a number of resubmissions from collectors attempting to upgrade coins to the next increment. There are only two pieces which have been graded MS-66 by PCGS and none graded at this level by NGC. These two coins represent the finest known examples for the issue. Both coins have made appearances at public auction. The first MS-66 specimen, which contains a moderate amount of toning around the obverse rim, sold for $89,125 in 2001, followed by a record setting price of $143,750 in 2008, and finally a significantly lower price of $74,400 in 2018. The second MS-66 specimen sold for $82,250 in 2015 and then $64,500 in 2020. 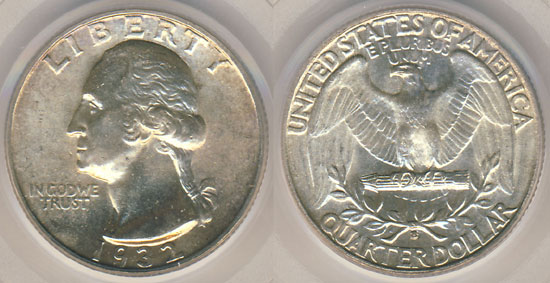 The 1932-S Washington Quarter shows relatively greater availability in higher grades. There have been approximately 270 examples certified by PCGS and NGC at the MS-65 grade level. Once again, this figure is likely inflated by resubmissions. At MS-66, PCGS currently shows five pieces holding this grade, while NGC shows eight pieces. At auction, the NGC MS-66 graded pieces have recently sold for prices of $13,200 and $13,220 in 2019. The PCGS MS-66 pieces have appeared less frequently and commanded higher prices. An example sold in 2001 reached a price of $18,400. An example graded MS-66 in a PCGS Secure holder with CAC verification reached a record price of $35,250 in 2013.

For each of these key dates, examples in circulated condition are much more affordable. When more collectors began pursuing the quarter denomination in the 1950’s, these pieces were pulled from circulation and saved in quantity. As a result, circulated examples can be purchased for a few hundred dollars each.