The 1885 Liberty Nickel (Buy on eBay) is a well-known key date coin that often stands in the way of assembling a complete collection of circulation strike Liberty Nickels. While this issue does not have the lowest mintage of the series, its low survival rate makes the coin particularly elusive and highly valued across all grades. The scarcity of the circulation strike also results in a premium for the proof version of the coin, which had a fairly typical mintage level for the era. 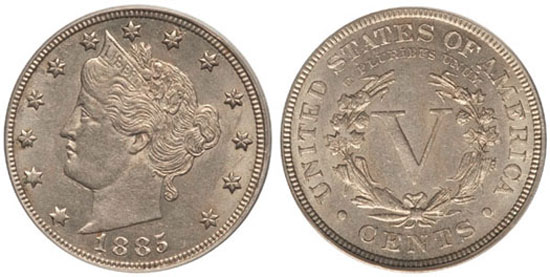 The Liberty Nickel series was introduced in 1883 to replace the previous Shield Nickels. The new design featured a bold portrait of Liberty facing to the left. Her hair is bound in a bun and she wears a crown inscribed LIBERTY accented with sprigs of cotton and wheat. Thirteen stars surround the image with the date placed below.

The reverse design features the large Roman Numeral “V” to denote the denomination, surrounded by an open wreath composed of ears of corn, stalks of wheat, cotton bolls, and leaves. The reverse inscriptions originally included UNITED STATES OF AMERICA above and E PLURIBUS UNUM below. An often-told numismatic tale recounts that some of the original Liberty Nickels were gold plated and passed off as $5 gold pieces. This led to the inclusion of the additional inscription CENTS below the wreath to clearly designate the denomination.

Throughout the 19th century, the Philadelphia Mint was responsible for producing all small circulating coinage, initially cents and half cents, and later nickels. As such, for nearly the entire Liberty Nickel series, the Philadelphia Mint exclusively handled production for the denomination. It was only in the final year that the Denver and San Francisco Mint facilities struck a limited number of pieces before engaging in higher production for subsequent series.

The low mintage of the 1885 Liberty Nickel was compounded by the extensive circulation of the issue. At the time, coin collecting was not widespread so the lower mintage was little noted and very few pieces were put aside. As a result, the majority of the original mintage circulated freely and over time many of these pieces were lost or worn beyond recognition. Decades later when coin collecting came into fashion, collectors building sets of Liberty Nickels quickly came to recognize the more elusive dates of the series. Chief among these was the 1885 Liberty Nickel, which was scarcely encountered. Higher end collectors would also come to recognize the scarcity of uncirculated or mint state examples of the issue. 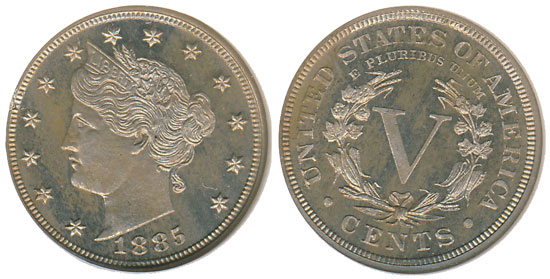 The Philadelphia Mint also struck proof examples of the 1885 Liberty Nickel. The total production in proof format was 3,790 pieces. Although this figure is far below the circulation strike mintage, it is important to note that these early proof coins were directly distributed to coin collectors and dealers of the day. The coins would then be held in collections and treated carefully. As such, the survival rate for these pieces was high, leaving ample supply for future collecting generations.

Nonetheless, there is a still a premium attached to the 1885 Proof Liberty Nickel. This stems not from its mintage but from the scarcity of the circulation strike. Especially in earlier years, collectors who could not afford a mint state example would opt for a proof coin, creating additional demand compared to other proof issues with comparable mintages.

As the primary key date of the series, the circulation strike 1885 Liberty Nickel commands a premium across all grade levels. The issue becomes particularly scarce at the gem level and higher. The major grading services PCGS and NGC have certified fewer than 150 pieces at grades MS-65 and higher. Most of these are at the gem level, with about 50 pieces graded MS-66, and only eight pieces receiving a grade of MS-67. These figures may be inflated by resubmissions.

Of particular importance for these early proof issues is the degree of cameo contrast present. Examples which have been designated cameo or deep cameo will carry premiums above examples without the designation. Of the total 1,800 examples graded, approximately 300 have received the cameo designation with the highest numerical grade at PR-68. Only seven examples have received the DCAM or Ultra Cameo designation, with the highest numerical graded at PR-67.