The 1895 Proof Morgan Dollar (Buy on eBay) represents an iconic rarity, which has come to be known as the “King of Morgan Dollars.” The issue was only produced in proof format and was not struck or released for general circulation. While there is a limited list of other United States coins that share this characteristic, the 1895 Morgan Dollar is the most famous and widely-known. The main reason for this appears to be the overall popularity of the Morgan Dollar series, which is often considered to be the most collected within the full spectrum of American coinage. 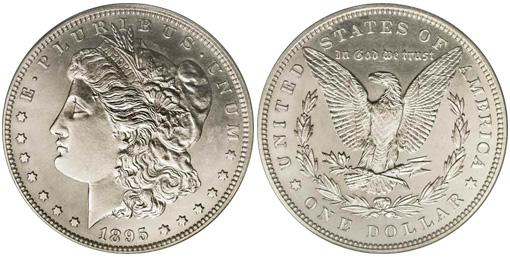 Since the Morgan Dollar had been introduced in 1878, the United States Mint had struck an enormous number of silver dollars despite relatively limited use in commerce. This was due to the Bland-Allison Act of 1878 and the Sherman Silver Purchase Act of 1890, which required the United States Treasury purchase large amounts of silver each month to be minted into silver dollars. After satisfying the need for the denomination within commerce, the remaining quantities would be placed into storage.

The overproduction and buildup of excess silver dollars continued until the Panic of 1893 resulted in the repeal of the Sherman Silver Purchase Act. By this time, the Philadelphia Mint vaults held more than 50 million freshly minted silver dollars, with an additional 100 million held at the Treasury building in Washington, D.C. There were also countless more millions held at Branch Mint locations in San Francisco, New Orleans, and Carson City. With so many held in storage and the legal requirements repealed, production of the denomination declined dramatically. This situation led to the creation of the key date 1893-S Morgan Dollar, the extremely low mintages of 1894, and finally the Proof-only issue of 1895.

Oddly, Mint records from 1895 indicate that 12,000 Morgan Dollars were struck for circulation at the Philadelphia Mint. This would represent a quantity of twelve bags, each bag containing 1,000 silver dollars. However, not a single circulation strike 1895 Morgan Dollar has ever been located and even well-worn examples are still considered to be Proofs.

While numerous scenarios have been offered to explain the fate of the twelve bags of circulation strike 1895 Morgan Dollars, most experts now agree that none were ever minted. Modern research into the Mint archives has indicated that the number mentioned was most likely an error and that the 12,000 coins were not dated 1895 but carried a different date. Another less popular theory is that the coins were actually minted with the 1895 date, but held in storage and later melted.

The mintage situation for the proof version of the 1895 Morgan Dollar is more straightforward. Mint records indicate that a total of 880 silver dollars were struck for inclusion in Proof sets. These Proof sets had gradually become more popular and included minor coinage of cents and nickels along with the silver coinage, comprising dimes, quarters, half dollars, and silver dollars. Gold denominations were also minted in Proof format, but these had to be bought separately and had much lower mintages. With regard to the 1895 silver dollar, it is estimated that approximately half of the original mintage has survived, resulting in an enduring rarity for collectors.

It is worth noting that the mintage of the 1895 Proof Morgan Dollar was not particularly low when compared to the mintages of other Proof Morgan Dollars struck by the Philadelphia Mint. Mintage levels typically fluctuated around 800 pieces for most years, with a few issues having lower mintages and a few slightly above 1,000 pieces. The perceived rarity and high demand for the 1895 Proof issue comes from the lack of availability of the circulation strike. Historically, collectors pursuing a date and mint mark set had to purchase a proof for the issue, driving greater demand and high values which persist to the current day.

A few factors come into play when evaluating the finest known and values for early United States Proof coins. First of all, the major grading services PCGS and NGC differentiate between coins with fully reflective surfaces, cameo contrast, and deep cameo contrast (referred to as “ultra cameo” by NGC). The cameo quality refers to the appearance of frosted raised design elements against reflective background fields. Secondly, population reports for proof coins are often inflated as the same coins are resubmitted multiple times in hopes of either obtaining a higher grade or a possible cameo designation. These factors should be taken into account when determining the rarity and value of an 1895 Proof Morgan Dollar in any grade.

The absolute finest known 1895 Proof Morgan Dollar is a single example graded by NGC as PR-69 with the Ultra Cameo designation. This amazing, high-end coin has not appeared at public auction since it has been certified and its value can only be considered vague guesswork at best. The high-end of the NGC population report also shows 17 examples graded PR-68. Of these, eight have the cameo designation and five have the ultra cameo designation. As mentioned, these figures are likely inflated by resubmissions. One of the pieces graded by NGC as PR-68 Ultra Cameo sold at auction in 2010 for $121,643.

The PCGS population report shows smaller numbers at the high end, with four pieces at the PR-68 level. Of these, two carry the cameo designation and one is graded PR-68+ with the deep cameo designation. None of these coins have changed hands in recent years. An example graded PCGS PR-67+ DCAM, which also received a CAC verification sticker, sold at auction in 2020 for an amazing $269,500 setting a new record price for the issue.

A lower-end “uncirculated” 1895 Proof Morgan Dollar (PR-60 to PR-62) tends to sell for at least $40,000. Gems are usually sold for at least $60,000 and often much more, depending on eye-appeal and cameo contrast. At minimum, a well circulated or damaged proof tends to sell for prices from $15,000 to $20,000. As such, it is needless to say that the acquisition of any 1895 Proof Morgan dollar, regardless of grade, is a true prize and often the highlight an advanced collection.