The “Three Legged” Buffalo Nickel (Buy on eBay) is an intriguing and highly collectible variety of the Buffalo Nickel series. As implied by the name, on the reverse of the coin it appears that the Buffalo, or American Bison, has only three legs. The right foreleg appears to be missing, while the other three legs are present. The variety was accidentally created by a Mint employee and has remained extremely popular with collectors since its initial discovery.

During normal production of 1937 nickels at the Denver Mint, excessive die clashing occurred. A die clash takes place when the obverse and reverse dies strike each other without a planchet between them, and part of the image from one die is impressed upon the other. The clashing was noted by a newer and somewhat inexperienced Mint employee, known as Mr. Young. Normally, when dies are severely clashed, they would be replaced, but Mr. Young tried to solve the problem by re-polishing the dies. This was a common practice at the early United States Mint, and was still done to remove minor imperfections from the dies, but the problem was severe enough that extensive re-polishing was needed. 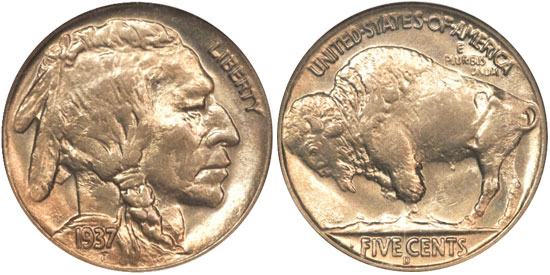 During the re-polishing process of the reverse die, not only the die clashes were removed but also some details of the design. This turned out to be the right foreleg of the buffalo. Perhaps overlooked or not deemed important at the time, the reverse die was put back into production. The coins struck from the die were quickly released into circulation.

There are some key diagnostics to look for when identifying a genuine 1937-D “Three Legged” Buffalo Nickel. First of all, since the reverse die had been heavily used before the clashing occurred, the back of the Buffalo appears mushy and the right hind leg appears extremely weak. Additionally, there appears to be a “cloud”, or irregular line, behind the front legs of the buffalo and moving towards the ground. Finally, unlike the majority of 1937-D nickels, the letters “U” and “P” in “E PLURIBUS UNUM” should not be touching the Buffalo.

Given the fact that there was only a single reverse die which was missing the right foreleg, it should not come as a surprise that only a tiny portion of all 1937-D Buffalo Nickels are the “three legged” variety. The total mintage for the issue was 17,826,000 pieces, a reasonable number within the series, indicating the importance of the nickel denomination within American commerce. Although the exact number is unknown, it is typically estimated that the number struck with three legs may have been around 20,000 pieces.

Virtually all examples quietly entered circulation, and it took some time for the variety to be discovered. However, once the variety was discovered and became more widely known, values rose and the pieces were pulled from circulation. This was facilitated by the fact that the variety was easy to spot and visible without magnification.

Many people found something magical or intriguing about a “three legged” buffalo on a circulating coin, a sentiment that persists to this day. In fact, many collectors decide to include this popular variety within a set of Buffalo Nickels, leaving out other varieties such as the rare 1914/13 overdate and 1916 Doubled Die.

The 1937-D “Three Legged” Buffalo Nickel is a scarce issue, but not extremely difficult to find. Most of the examples that are encountered are in circulated condition, and only a minority have survived in uncirculated grades. Most of these, as the population reports testify, are in the lower mint state grades, with major bagmarks and perhaps some luster breaks. Gems, meaning those graded MS-65, are very rare and trade for a large premium. Examples graded at higher levels are usually viewed as a major rarity and seldom offered for sale.

The PCGS population reports shows the finest pieces graded by the company as about a dozen pieces certified in MS-66. One grade lower, there are around 60 examples graded MS-65, although it appears that as much as one-third of this number consists of resubmissions. The population numbers at NGC are similar, but their report also appears to be heavily influenced by resubmissions. One coin has been graded as MS-67* (the star denoting extraordinary eye-appeal) with two others are graded MS-67. Moving lower, there are 20 examples graded as MS-66 and about 60 examples graded MS-65.